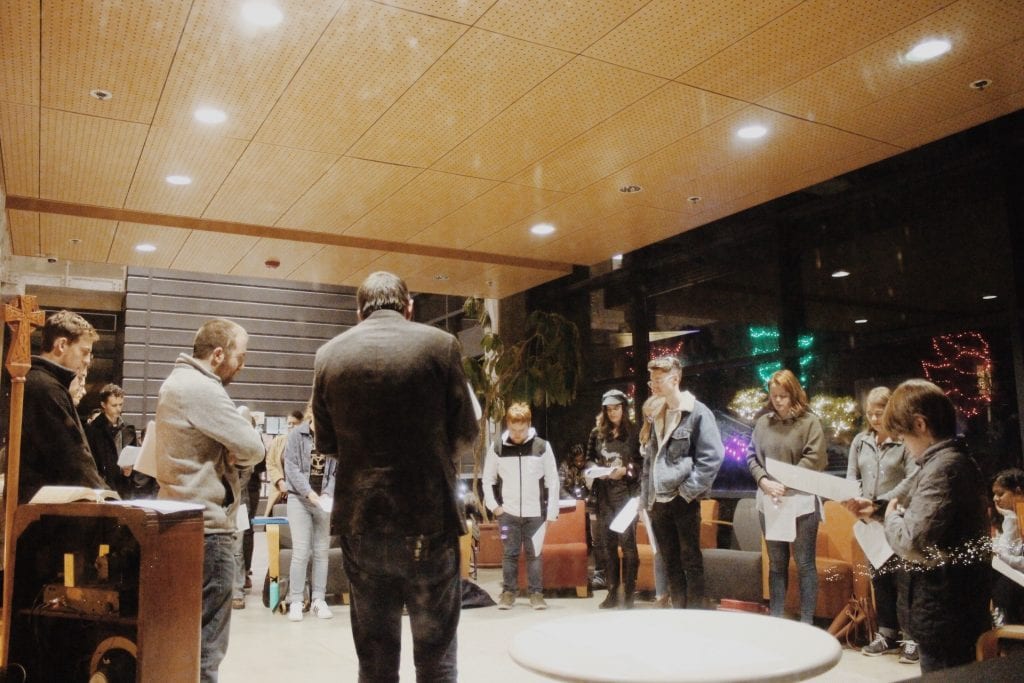 On Thursday, Dec. 6, Dr. Jeremiah Webster hosted a Vespers prayer service in the HSC fireside for students in preparation for finals and the Advent season. The event was advertised as a time of liturgical worship, which Webster defined as “corporate prayer.” He opened the service by discussing what corporate prayer meant, and why he believes it is important to occasionally step back from the usual style of worship practiced in the NU community. Webster challenged students to reflect when he asked “how can we hear the voice of God with so much noise?”

Each attendee was given a packet of papers with readings for the service, so that they could follow along and repeat when appropriate. The service consisted of several scripture readings, as well as a group recitation of the Apostle’s Creed, in addition to the litany to be repeated aloud. There were moments of silence, dedicated to meditating on God’s word and time to take part in the confession of sins. Vespers services have been a practice in the church for centuries, and they are still commonly practiced in various churches, such as the Methodist and Lutheran churches.

The service challenged attendees to examine the benefit of taking part in Christian practices that may be outside of ones denomination or set of norms. Webster gave credence to the idea by pointing out the diversity in the body of Christ, and the various ways Christians are able to worship God. Webster said that he believes there are many benefits in exposing oneself to various types of Christian worship and practices, which often broaden people’s worldview and idea of what Christianity can look like.

The motivation behind creating the event was not only to introduce students to different worship styles, but also to provide a quiet space for students to spend time with God.

Webster said that the event was purposely scheduled to take place during the stressful time surrounding finals week.

“I wanted to offer students a unique space for prayer, contemplation, repentance, and worship during the mad season of semester’s end,” Webster said.

He quoted critic George Steiner who once said that we live in an age committed “to the systematic oppression of silence.” Webster sought to create a place where, as a community, NU students could live out the mandate of Psalm 46:10, which reads, “Be still, and know that I am God.”

Student Allison Elliott described the event as a being a welcome break from the chaos of the modern world and daily life.

“[It was a] really great place to get away from the distraction of school and technology and focus on the word of God,” Elliot said.