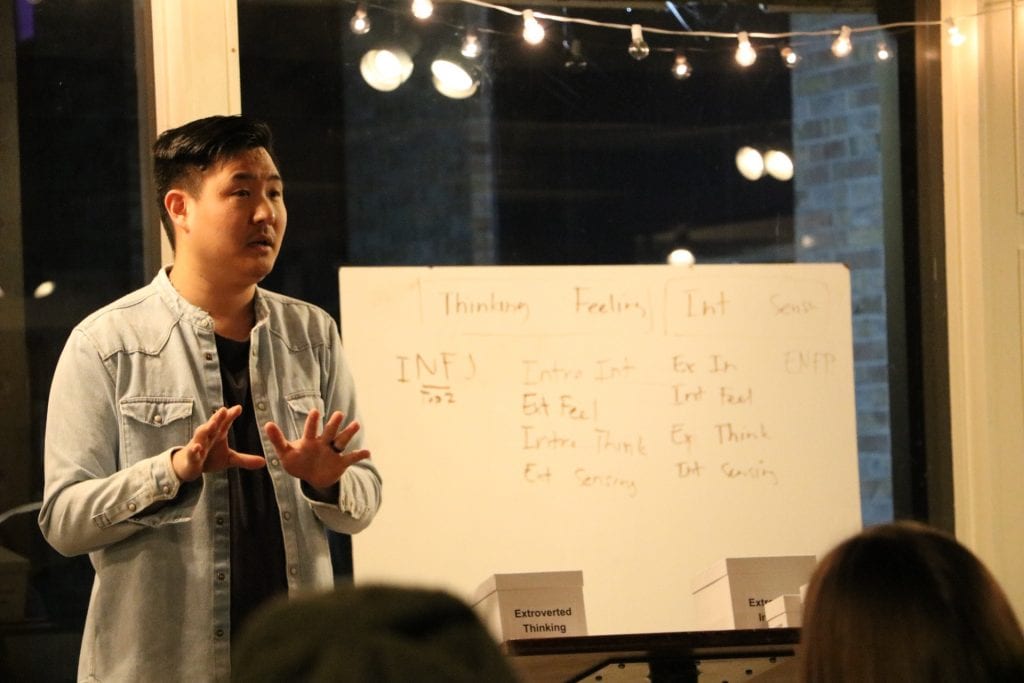 NU Admissions Coordinator Jon Leong continued the Last Lecture series on Feb. 14. Sacrificing what could have been a Valentine’s date night with his wife, Leong took the time to give students the wisdom he would hope to impart if it was his last chance to do so.

Leong came equipped with three separate topics he planned to tackle over the course of the evening. He demonstrated how the things that matter to a person can vary widely while remaining connected in their combined rooting in the Lord and his masterpieces. Leong addressed the topics of east and west culture, the Meyers-Briggs Type Indicator (MBTI) personality assessment and finding one’s life purpose.

After a vote from the audience of which topic to hear first, Leong began by addressing his passion for the MBTI. Most students were required to take the questionnaire as a part of the core Identity & Vocation class. Since many people do not fully understand the meaning of their computed four-letter personality type beyond what their internet results tell them, Leong explained that God has created each of us with our own individual personality type.

Leong then gave students a deeper knowledge behind the meaning of their personality types by selecting a few students and breaking down what their four-lettered personality types mean. He explained that the MBTI tells people how they do what they do, not why.

Leong also emphasized the importance of understanding self and others in order to foster better relationships and how knowing oneself is beneficial for understanding others in a greater way.

“Some people want to go into learning about others but they don’t know about themselves,” he said.

Leong then addressed the differences in Eastern and Western culture. There are subtle differences that guide the way of life for people in every culture. He stressed the importance of having an attitude of understanding and awareness when it comes to communicating with someone of a different culture than one’s own. It often takes a willingness to see from more than one’s own perspective to have a meaningful interaction or relationship with another, regardless of culture.

“I think it’s important to understand some of the pressures when approaching from one side or the other,” Leong said.

Leong’s final topic was about finding God’s purpose for one’s life. He explained that God will use both the good and bad times to shape people and He never intended for all of life to be routine. Leong explained how learning to yield to the shaping process, which usually leads to pain and discomfort, will shape and equip a person earlier in life.

“If we learn to submit to the hard things in the moment we will be ready for the next season,” Leong said.

Students were invited to stay and ask questions at the end about any of the topics that intrigued them. The Last Lecture event is typically put on by the Resident Assistants of the GPC living area. This was the first time though, that MOSAIC and the GPC RA’s have collaborated for the event.