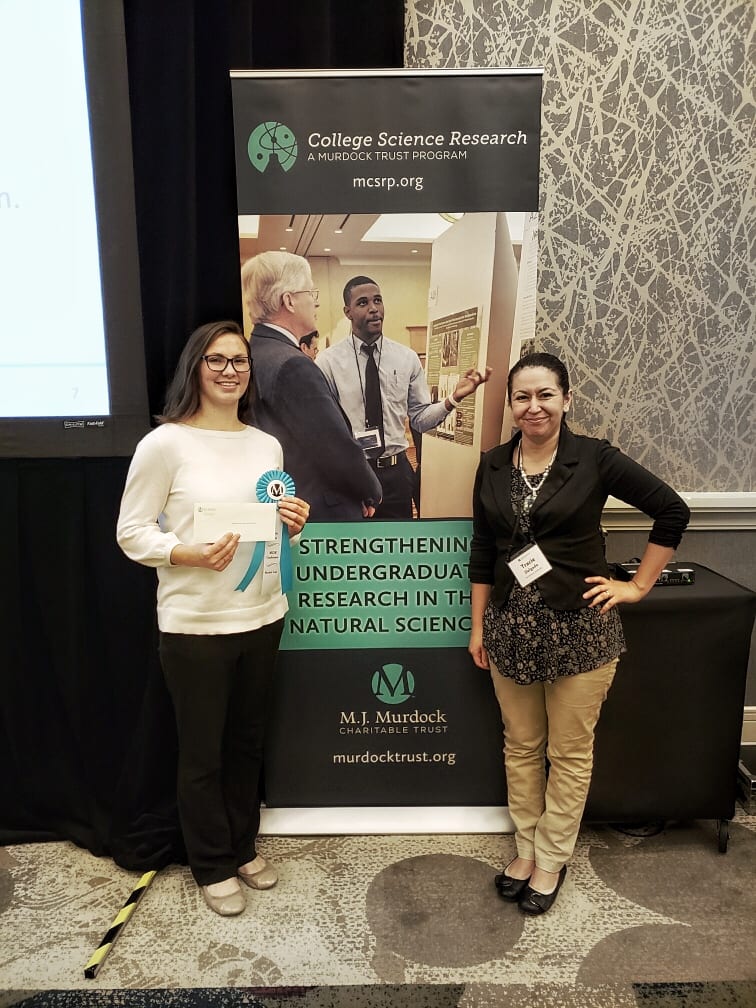 Miller was awarded the prize on November 10 at the 2018 Murdock College Science Research Conference for her research on murine herpes virus – a herpes virus that affects rodents – that is very similar to the human virus. This virus can also cause cancer.

Miller conducted her research while working with Delgado as part of the Pathway to Undergraduate Research Excellence (PURE) Scholars program.

Delgado screens and chooses different students each year to do research with her in the program, and Miller was one of the students selected last year. Miller has been working with Delgado for almost two years now, including an eight-week summer internship.

Delgado received a grant in August of 2015 from the M.J. Murdock Charitable Trust to conduct her research on how herpes viruses cause cancer.

“We study the mouse virus equivalent of [the] human viruses. One of the ways that cancer forms is an alteration of the metabolism of the host cell. My lab is studying basically how murine herpes virus 68 causes cancer by altering its host’s metabolism,” Delgado said.

There are currently three research projects underway, and Miller’s is one of them.

Miller has been specifically looking at how an FDA-approved fat-blocking drug could stop the virus from producing fatty acids in the cells. Her research stems from the research of NU graduate Sarah Clark, who first began looking into the metabolism of the virus.

“What we’re looking at is how viruses change the metabolism of the host cell it infects, or how this virus changes the metabolism of its host to create virus structures,” Miller said. “So our goal is to be able to understand how those processes work and effectively shut down the virus from being able to spread through cells and cause disease.”

Miller then presented her research at the Murdock conference, alongside students from other universities.

Miller said that the honor came as a surprise to her, but it was rewarding to be recognized.

“Honestly, I was a little shocked. The conference is really competitive, normally there’s at least fourteen other people competing for the same category with all variety of projects,” Miller said. “It was really cool to see all the work that I put in over the last two years and actually getting to see that it was recognized as being something of interest…I was really happy to get it.”

Miller said that she hopes to eventually transfer her murine herpes research to human clinical studies.

Miller has enjoyed being able to do hands-on research at NU.

“We learn a lot of problem-solving, a lot of research is about failing…and learning how to fix it, how do I adjust for the changes I can’t control. So, that’s been really cool to get to learn the thought process and how you work through the problem…and how to look for new paths, new ideas of how to go at a problem rather than just getting stuck in the same approach every time.” Miller said.

Miller is graduating this spring, and hopes to become a naturopathic doctor and use what she has learned from this project to find other unique treatments.

“My hope is that my background in the lab will eventually allow me an opportunity to apply my naturopathic skills to addressing disease and how to treat it, especially just the problem-solving aspect, getting to sit down and look at a disease and how we can approach it without having to  necessarily use a drug or more extreme measures and being able to give the body just its basic needs to help it rebuild itself,” Miller said.

Delgado praised Miller for her dedication to her work and for her accomplishment.