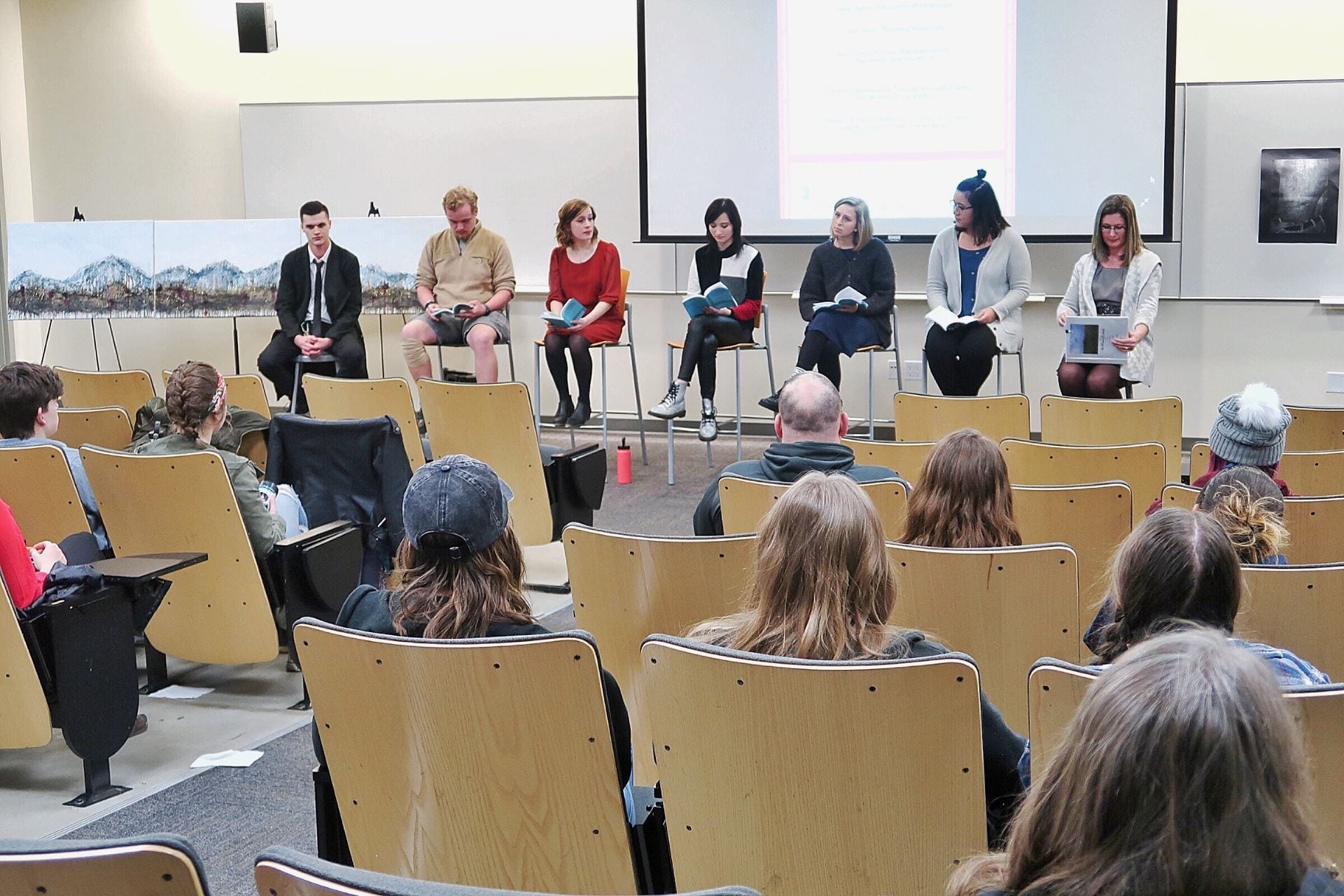 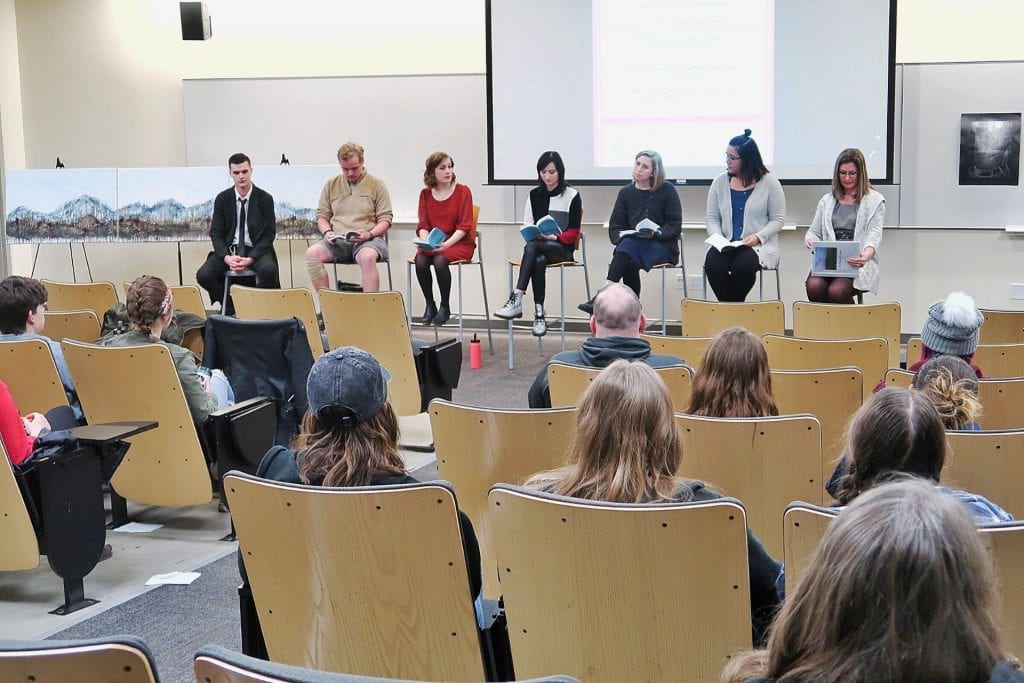 The annual Faith in Humanities Conference took place in the Argue Health and Sciences Center from 2:00 p.m. to 9:00 pm on Tuesday, Feb. 26. Sigma Tau Delta, Northwest University’s English department honor society has hosted the conference for the last thirteen years.

The conference focuses on a variety of student works and seeks to show the diverse range of faith-enriched academic and artistic talent NU has to offer. This year’s conference featured six student panels and a keynote address by Dr. Hal Bush, a professor of English at Saint Louis University.

Student panels for this year included First-Year Composition, Feminist Criticism, The Limits of Language, Defining Modernity, Artistic Representation and Redeeming Tragedy through Drama: The Women of Lockerbie. Each panel consisted of three to five students presenting academic or artistic works, followed by an open question and discussion time.

According to Sigma Tau Delta officer Abby Rogers, the event is designed to showcase student work and reignite a passion for the humanities.

“The purpose of the Faith in Humanities conference is to appreciate students’ academic and artistic work outside of the classroom setting,” Rogers said. “There aren’t many local opportunities for undergraduate students to show off their work in a conference like this.”

Many students attended the event, filling most of the room for each panel session. While some came for spiritual life credit and to support their peers, they found spiritual vitality and insights that kept them coming back for more.

The Feminist Criticism panel offered both a historical close-up of women’s rights activist Olympe de Gouges, as presented by Hannah Polyak, and feminist criticisms of literary works such as Charles Dicken’s “Great Expectations” and Mary Shelley’s “Goblin Market.” Hannah Vaughn argued that it is not the male gaze that drives the plot of “Great Expectations,” but the female gaze. JoDee Maytum argued that in “Goblin Market,” both Laura and Lizzie present angel and monster binaries.

Other student panel highlights included a discussion of the ethics of insanity plea and rehabilitation of psychopaths from the First-Year Composition panel. After a discussion with the audience, panelists agreed it wasn’t one or the other that was more important, but above all, justice should be served.

Literary criticism took the stage in the Limits of Language panel, focusing on how language triumphs and falls short in several poems and novels. Student Alli Monea took a close look at Percy Shelley’s “Ozymandias,” and Rogers examined “Mont Blanc” also written by Shelley and “Great Expectations” by Dickens made a reappearance in Emily Schlepp’s examination of Jaggers’s linguistic power.

There was an in-depth discussion after the Defining Modernity panel about war and its affects on modern thought. Student Reagan Wheelock discussed the division between the upper and lower classes during the French Revolution, student Tyler Whitney analyzed war and its effects on intimacy in “All Quiet on the Western Front” and student Hannah Anderson presented the life of Vera Brittian – a war nurse and pacifist during the first World War.

During the artistic panel, “The Image and the Word,” panelists presented paintings, sketches, film, memoir, and poetry, along with commentary about their creative processes. Highlights included student Aquilla McCrory’s gold-leaf ordained homage to the scars everyone carries, and a first-ever short film screening by student Benjamin Lacey about a woman’s relationship with God.

The cast of The Women of Lockerbie treated the room to a Scottish-lilted, theatrical reading of the play. Premiering in April, the play focuses on the redemption of tragedy in the wake of the bombing of Pan-Am flight 103 over Lockerbie, Scotland.

Keynote speaker Dr. Hal Bush spoke on the spirituality of forming good habits, and what that means for both faith and the brain. He spoke about how neural pathways are altered in habit making, and one of those habit-making practices is spirituality. Bush argued that the formation of new neural pathways could be God’s way of changing people physically.

Bush also spoke about striving for greatness. He made the point that not all geniuses started out as geniuses – that it takes passion, desire, and hundreds of hours of practice to become an expert on anything. If we have a goal, Bush argued that we must think about it, work at it, and then become it; training neural pathways to create good habits.

Student Issac Fox said that he thought Bush’s keynote address was relevant for his audience:

“He tackled complex subjects that are relevant for now. It didn’t feel like a lecture where you might have been over the same subject multiple times. He gave us something to really think about and apply,” Fox said.

Overall, student Haley Jones said that the conference was an important reminder of the importance of the arts and the humanities. Jones presented on both “The Image and the Word” panel and on “The Women of Lockerbie” panel.

“It was an honor to present among so many talented people,” Jones said. “There is a stigma that the arts are not as important as other fields, but this conference is a great reminder that the arts are absolutely worth studying. Humanities get to the heart of what we want to be as a society and as a people.”