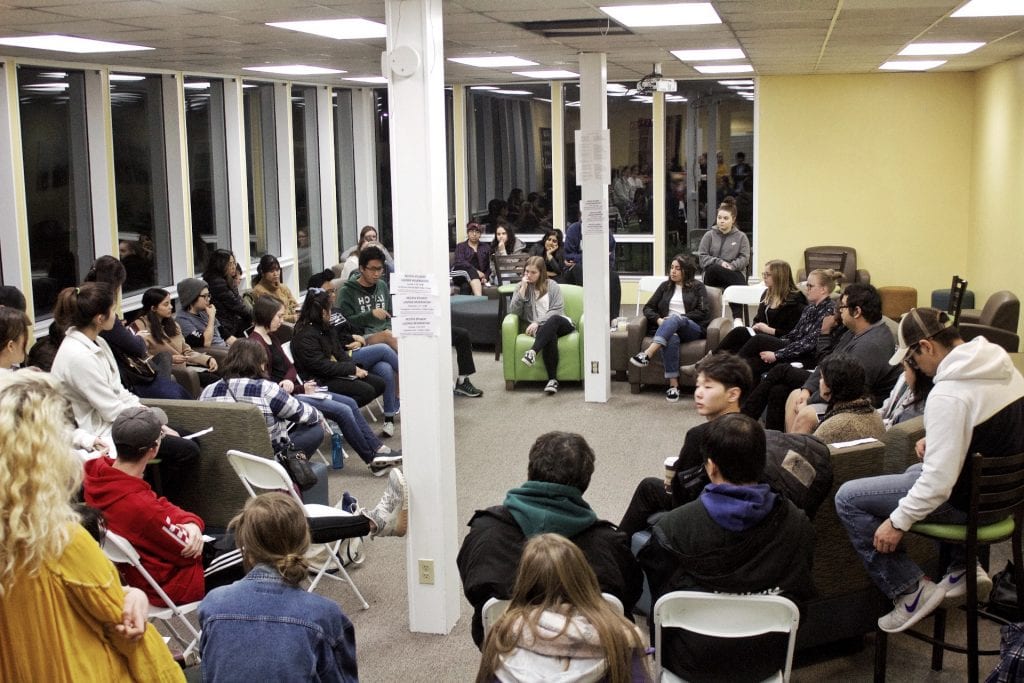 MOSAIC and the International Department partnered for this event, which featured four international student panelists. Natasha Vederoff and Beighlee Parabrub-Vidinha facilitated the discussion.

Benjamin Mukumbya from Uganda, Gerson Barrientos from Venezuela and Peru, Sofie Back from Sweden, and Mirae Yoo from South Korea were the panelists. They each answered a question about their experiences as international students.

“Have the attitude of being willing to change,” Barrientos said while sharing about his experiences, adding that domestic students need to be able to learn from international students.

“It’s been an interesting journey,”  said Mukumbya, who competes on the NU Chess team and was recently elected ASNU President for the 2019-2020 school year.

There were also four discussion questions for everyone in attendance to engage with and talk about. Several students shared their perspectives.

“I think the biggest thing when you are interacting with people is remembering that they are people too,” Alondra Hernandez said.

Yoo, one of the panelists, talked about her positive experiences as an international student.

“I was very touched because other students helped me get involved in class, and they understand that English is my second language. I’ve never experienced anything negative,” she said.

The final question, which asked what practical ways students could bridge the gap, brought a lot of discussion and tips. Students suggested that people be intentional, learn how to pronounce the real name of their classmates, understand the differences between cultures, and be persistent.

“I think it was really exciting to create a space for International students to share their experiences for such a wide audience,” Vederoff said in an email. “Nights like these are only supposed to be the beginning of the conversation, and from different conversations I’ve had, it seems like people have really been continuing on the conversation and making more of an effort.”