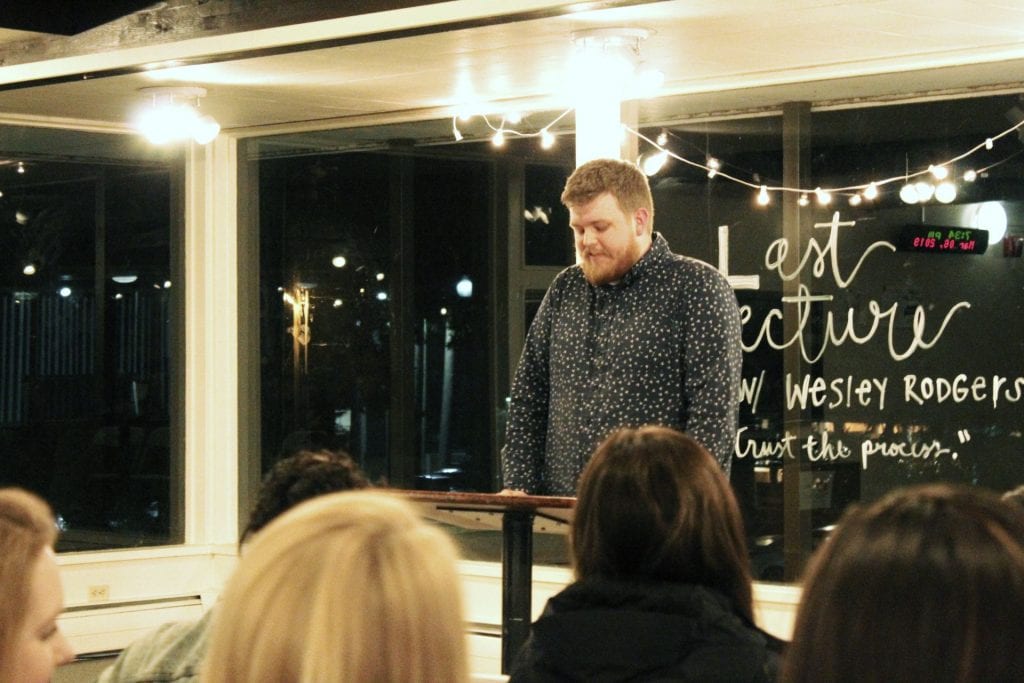 Wesley Rodgers, apartment AC and Harry Potter fan, spoke about common perceptions of death at NU’s most recent Last Lecture. On March 6, he explained that we tend to have one of two attitudes about death: we either embrace it or flee from it.

Rogers provided an example of this with a comparison of characters from Harry Potter. Rogers used Voldemort, the main antagonist from the series, as an example of fleeing from death. Voldemort’s attempts to escape death eventually lead him to “cut ties to normalcy.” He becomes evil, killing others in order to preserve his own life. On the other hand, Dumbledore, one of the protagonist figures, views death as “the next great adventure.”

“Memento mori” is Latin for “remember you must die.” Rodgers discovered the phrase this year on Twitter. It piqued his interest because a nun from Illinois had tweeted it, along with pictures of skulls and other death-related content. Upon further research, Rodgers found that Christian monks used “memento mori” to remind each other of death’s inevitability.

“I thought it was weird that this nun, this holy woman, talks about death all the time,” Rogers said.

Rodgers emphasized both Jesus’s role in redefining death and the fact sin and death have lost their power over us.

“When we embrace our own death, what we’re really doing is embracing eternal life,” Rogers said.

It is important for us to embrace that mindset and let go of our fear of death. It is also a call to action: “only when we truly embrace our mortality and the mortality of those around us will we begin to understand that we must share the Gospel with them,” Rogers said.

Rodgers continued with another example from Harry Potter: when Harry Potter, the main protagonist, learned that he must die in order to defeat Voldemort, he was ready to do so. Harry embraced his mortality and was ready to sacrifice himself.

“His life isn’t so important to have to run away from death,” Rodgers said.

This view of death is drastically different than how our culture views it. Moralistic therapeutic deism is popular today, a theology explaining although being good can get you into heaven, death is something that ought to be feared and avoided.

“If we fear death or are apathetic to it,” Rodgers said, “we’re missing a huge part of who God is.”

Moralistic therapeutic deism buys into the ways of the world while Christians are called to live counter-culturally. Living counter-culturally means realizing that death is not bad, because God’s plan is bigger.