Conservation at the Caf: Food Waste and How Students Can Make a Difference 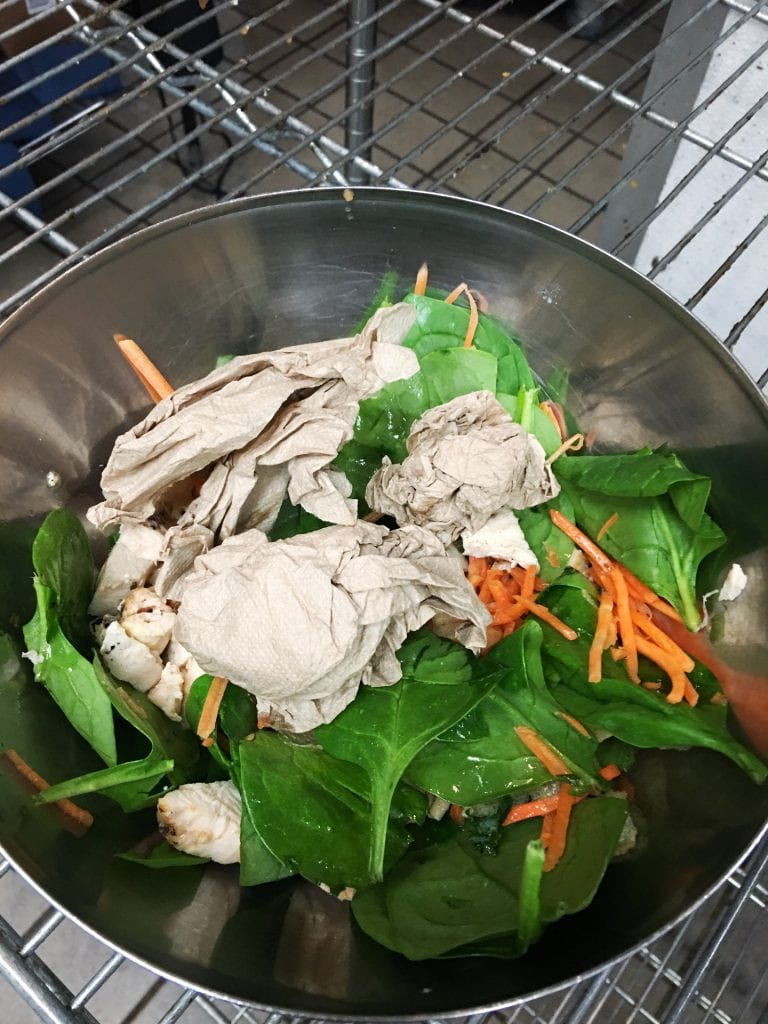 Monday, April 22, was Earth Day, and Northwest University has been doing its part to reduce its environmental footprint. In the week leading up to Earth Day, ASNU launched a food conservation campaign in collaboration with the Caf. Colorful signs were posted around the Caf encouraging students to opt for smaller portion sizes to reduce food waste. But how much food do NU students really waste, and can a campaign like this really make a difference?

Director of Dining Services at the Caf and the Aerie, Ali Hamze has years of experience as a director of dining services, and sees a lot of food waste go into the composting bins after every meal.

“Lunch is our biggest meal in terms of food waste, but three to six 40-pound tubs of food waste get thrown away each meal,” Hamze said. “Sometimes the eye is bigger than the stomach.”

A lot of the food waste doesn’t come from behind the counter, though. The staff at the Caf does their best to preserve food and reuse any food that doesn’t get eaten the first day. Food that is left over from one meal can be used in another dish for a second meal. For example, chicken from rotisserie at lunch can be used in a soup for dinner, or in a pasta dish the next day. Because the Caf makes an effort to reduce food waste, ASNU and the Caf decided that the campaign mainly needed to be a student-focused effort.

The food-waste conservation project stemmed from a recycling initiative project that ASNU launched last year. ASNU saw that students were willing to recycle, but they weren’t sure where or what they could recycle. After placing recycling cans and signs across campus to increase awareness, ASNU saw that increased visibility and accessibility made a difference in the amount of recycling.  They decided that the same could be done for food waste.

ASNU and the Caf worked with the city of Kirkland to get statistics about food waste and how the school could help. The city provided the information for all of the promotional posters in the Caf, as well as some info about compost and food disposal.

“Something that students might not know is that not all food can be composted,” ASNU Chief of Staff Hannah Vaughn said. “Fruits and vegetables are the main food items that can be composted. Everything else is wasted.”

In addition to the signs and infographics posted in the Caf, Hamze made an effort to provide smaller portions and encouraged students to come back for seconds.

“We are not trying to be stingy; the food we make at the Caf is for students,” said Hamze. “Know that the Caf is open for three hours a meal, and if I give you a little, you can always come back for more.”

While students hold the power to reduce food waste, Hamze recognized that the Caf has a responsibility to monitor how much they serve. If Caf staff serve too much food, that food is already wasted if it isn’t eaten. If staff are more conscious of portion sizes and encourage students to come back for seconds if they want more, students have the opportunity to take only as much as they need. This new practice could greatly reduce food waste overall.

The student body was also encouraged during the week by Student Development to finish their meals. Student Development hosted a clean plate challenge on social media. Anyone who ate all their food and posted a picture of their clean plate was entered in a drawing to win a $100 gift card to the student store. Social media contests like this one gain student attention and encourage students to participate in the campaign.

“Progress is progress,” Vaughn said. “Hearing student conversations about food waste and observing students making a conscious decision to only take what they will eat showed that something was starting to stick. I hope that is something that continues to improve.”

“While I expected a little more from a school in Washington state, this is a great improvement for what the event was,” said Hamze, who has done food conservation campaigns at schools in Nebraska and Texas as well. “Hopefully next semester we can look at our results and see how we can do better.”

If anything can be gained from this campaign, ASNU and the Caf say they hope it is increased awareness and motivation. Change is possible, and the Caf is one way that students can get involved in conservation efforts. According to Vaughn, reducing food waste is the responsibility of the individual.

“What you do matters, even if you don’t think it does,” Vaughn said. “If everyone takes small steps to conserve food, it equals one big step. Don’t rely on someone else to make a difference.”

Hamze recognized that reducing food waste won’t happen overnight, and that making habits is the best way to create change.

“I don’t want to show pictures of food waste to make change,” said Hamze, “It is about educating students and staff.”

Both ASNU and Hamze say they are looking forward to continuing the food conservation campaign (and food waste reduction efforts in general) in the future.

If you have ideas, suggestions, or questions about food waste reduction efforts, please contact ASNU at asnu@northwestu.edu, or Ali Hamze at ali.hamze@northwestu.edu.

A Christian Preview to Avengers: Endgame