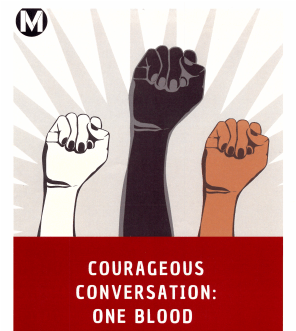 MOSAIC hosted the year’s first Courageous Conversation last Tuesday. The theme was “One Blood,” and the discussion centered around how the church should approach diversity while still maintaining its unity in Christ.

Students used different imagery to convey that, while we may appear different, we can all work together for God’s glory. Fiona Cochran explained how like a flower, or a physical body, our differences are essential to the overall function and beauty of God’s kingdom. Students cited God’s creativity as another reason that the church should pursue diversity.

“It’s like a flower. Every petal and part is different, but it’s still one thing,” Cochran said.

More diversity in the church also means there is potential to reach a larger group of people. Ignoring others in favor of pursuing the comfort of familiar faces limits the church’s impact. Some students noted that regardless of diversity, God is still able to work through any group of people.

The discussion then shifted to distinguishing between unity and conformity. Students agreed that, although both terms involve some change or shift in behavior, conformity is negative because it involves suppressing some part of identity or culture in favor of fitting a larger mold. Unity focuses more on bringing people together and championing differences.

“Conformity is compromising who you are to fit a mold,” Holly Hollopeter said.

The larger cultural mold is something many people recognized as detrimental to churches and individuals in pursuit of diversity. One student pointed out that God does not use a mold: He is described as a potter, creating every individual uniquely and doing so with intentionality. Because of this, we should not expect everyone to be or serve exactly the same way in the church. When choosing church employees, leaders too often begin with the position, rather than the person. No person will perfectly fit a set mold.

Molds represent cultural insecurities. We learn these molds when we are young, and they are enforced by culture. When we live into who God calls us to be, we can break the mold and live authentically.

Students then broke up into small groups to define culture. When they returned to the larger group, they shared their definitions of culture, as well as examples of their personal cultures.

Culture was defined as a set of shared beliefs, values, and traditions. Some said it was hard to define. Others said that culture was defined by group insecurity. Culture is not supposed to be all-consuming, but we attach our identity to it. Culture exists on an individual scale as well as a larger scale.

This was represented in students’ answers: some cited family as their culture, or lazy Sunday afternoons. Others talked about foods, traditions, and values that were part of their cultures.

From here, the discussion evolved into reflection on the difference between cultural appreciation and cultural appropriation, and how we ought to engage other cultures in a respectful way.

One student used the analogy of being a guest in someone’s home. She explained that when participating in someone else’s culture, we are guests. If we are inviting someone to share our culture, we are hosts. As guests, we must approach with humility and respect. As hosts, we must educate with grace. By being good guests and good hosts, we can respectfully share our cultures and build more unity among ourselves.