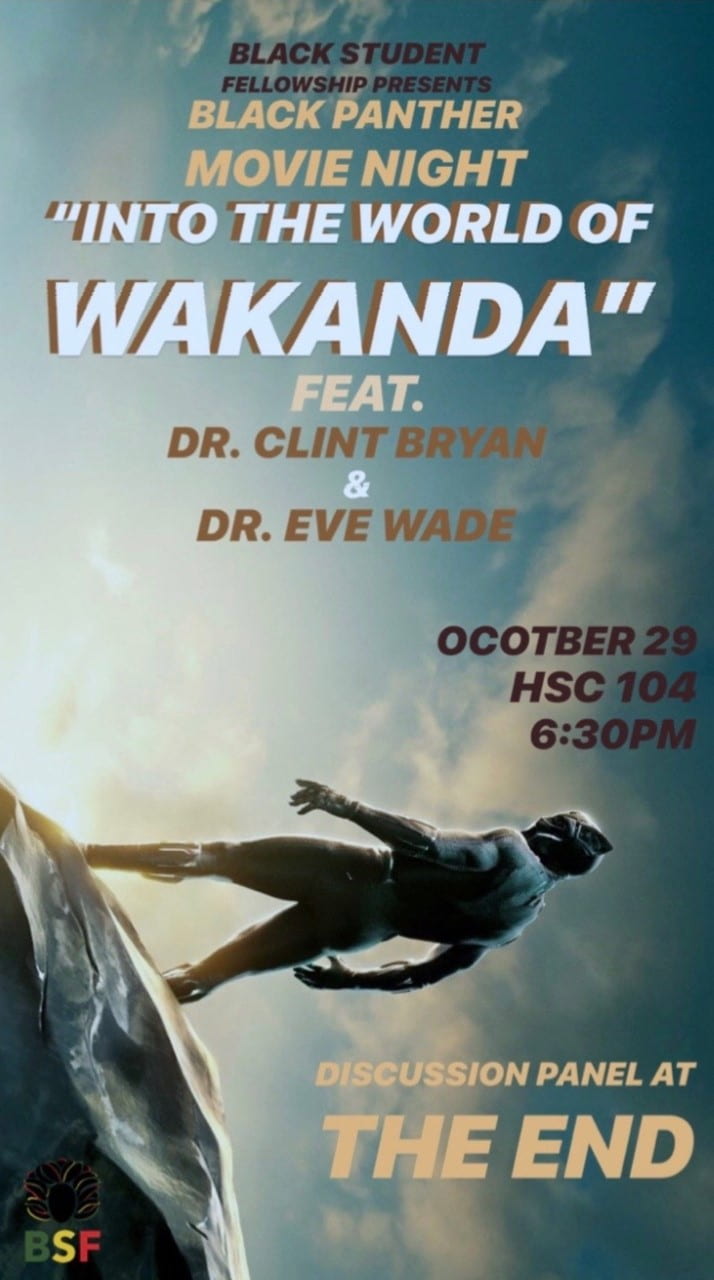 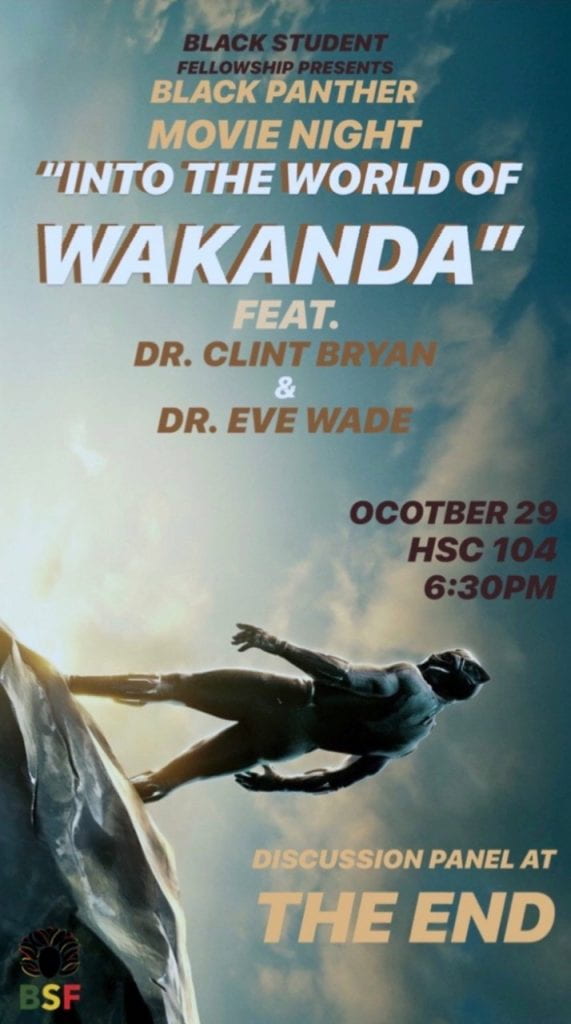 On Oct. 29, Black Student Fellowship hosted a showing of “Black Panther.” After the film ended, a discussion was led by a panel consisting of Dr. Clint Bryan and Dr. Eve Wade. Bryan teaches rhetoric and composition in the College of Arts & Sciences, and he will be teaching African American literature in the spring. Wade, an assistant professor of history in the College of Arts & Sciences, teaches US History, Western Civilization, and an upper-level course about the Transatlantic Slave Trade.

The first question, about the numerous cultural inspirations within the film, was posed to both the panel and to the audience, as students were encouraged to break up into smaller groups and discuss the question before the panel provided their answer.  After the small groups briefly discussed the question, the panel talked about examples of cultural inspirations that made their way into the film. For example, a majority of the costumes in the film are directly inspired by African clothing and culture. As another example, the panel pointed out how the landscape of Wakanda is directly inspired by the landscapes and city designs of African cities. The film benefits not only through minority representation but also through presenting a largely unfamiliar culture to a wider, mainstream audience.

The second question posed to the panel was about the film’s portrayal of Afro-futurism. The concept of Afro-futurism arose during the 1990s and referred to the integration of African culture with technology in various ways. In this film, the story presents Wakanda as the most technologically-developed nation on the planet, and it incorporates this futuristic portrayal of African culture with a narrative about the tension between cultures that have or have not suffered because of colonialism. The entire tension between T’Challa and N’Jadaka (a.k.a. Erik Killmonger) hinges on their vastly different cultural experiences living in either an Afrofuturistic Wakanda, or a significantly less prosperous culture in southern California. Even though both of them are Wakandan by blood, one of them is not Wakandan by culture, and that tension summarizes the complexity of black identity.

The third question posed to the panel questions how the film defies gender stereotypes. Bryan was quick to point out the representation provided to roles that extend beyond the “black best friend” stereotype. He pointed out the female representation within the Dora Milaje, who led the entire Wakandan military, as well as the agency given to Nakia that goes beyond many popular love-interest roles. Wade closed the discussion with a more social observation about the film’s message: “Even though Wakanda isolated itself, nobody exists alone.” Although this statement may not specifically apply to one gender, it does unveil a deeper truth about humanity’s God-given desire for community and companionship. The film’s resolution affirms that people’s lives must always balance their own preservation and health with the need to seek personal, human connections with the poor, the orphan, the widow.

After all these questions, a surprise final question was posed: what would Africa look like without colonization? Wade chose to identify a deeper problem than just an unfair abuse of power.

“I don’t know if colonization is the problem so much as institutional racism is the problem,” she said, noting the American and European economic boycott of Haiti as a historical example of global powers abusing power against cultures and nations that they consider to be inferior.

Bryan incorporated theology into his take on the problem, pointing to an evil power which lies deeper than what human eyes can see.

“It’s the sin of racism that feeds the colonialism,” he said.

In response to all this evil, the film affirms the core identity of its message through the character of T’Challa. When he decides to send foreign aid and education to people in need across the globe, he achieves a compromise between Wakandan isolationism and Killmonger’s ideology of violent revolution. Upon arriving in Oakland, T’Challa sees a boy playing basketball with his friends. While the other boys were checking out the futuristic Wakandan ship, this little boy walks up to T’Challa and asks who he is. In this moment, T’Challa realizes that this child, this basketball court, this place, this culture was the same culture in which N’Jadaka grew into Erik Killmonger. In this moment, he sees a boy who looks surprisingly similar to young N’Jadaka, and he sees an opportunity to change his future. In this moment, all the audience sees from T’Challa is a smile; but in that simple gesture, the audience is lead to believe that T’Challa will empathize with this child and perhaps seek to educate him and be the father figure for him that N’Jadaka never had.

In my opinion, “Black Panther” is still the best film in the MCU. If you would like an extensive review for why this is true, check out my extensive review of the film on my blog at judahwessel.wordpress.com. For this event, Black Student Fellowship focused on the relevant cultural impacts of this film.