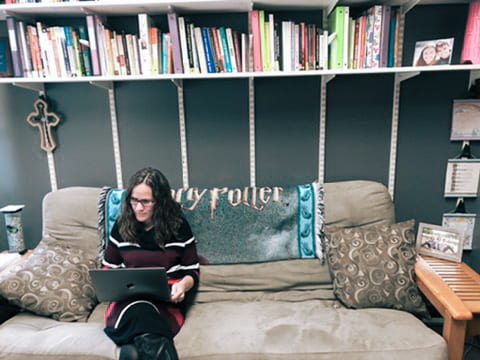 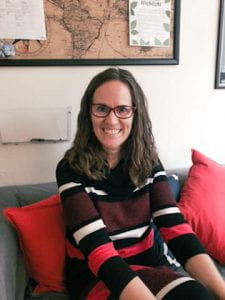 “Don’t underestimate the power of a small step,” said Dr. Renee Bourdeaux, fourth-year faculty member of Northwest University’s communication department. She would know—in just one year, she not only published her first textbook, “Communicating Love in Relationships,” but also received the Holsinger-Hartje Faculty Award for Excellence in Scholarship.

Bourdeaux acknowledged that her recent endeavor in publication was not something she had planned.

“I had never even dreamt of writing a textbook,”  Bourdeaux said.

Two years ago, while attending the National Communication Association’s National Conference, Bourdeaux said she was bombarded by publishers. One gentleman in particular struck up a conversation, in which Bourdeaux mentioned that she would love to see a textbook written on the intersection of faith and academic work from a Christian perspective.

“He suggested that I should be the one to write it,” Bourdeaux said. “At first, I was absolutely against it. But he gave me his card, and several conversations later, I was signed on. One year later, the textbook was published. As a communications scholar, I can say that he used the social judgement theory very skillfully.”

Bourdeaux’s textbook will be featured as required reading in her “Love and Communication” course offered in spring semester 2020.

In addition to her first venture into publication, Bourdeaux has been recognized for her achievements in communication research.

The Holsinger-Hartje Faculty Award recognizes those who embody excellence in scholarship. This year, the award was presented to Bourdeaux for her involvement in scholarship and research appropriate to her academic discipline: communication studies. While there are many different aspects of this field (conflict resolution, organizational communication, etc.), Bourdeaux primarily focused on researching interpersonal and positive communication.

“My impetus is to find ways to study the world through healthy relationships—if we learn to love well, it creates beautiful things,” Bourdeaux said. “I think we see God as our model for relationships; research helps illuminate all of the complexities God has gifted us through communication.”

Currently, Bourdeaux is working on several research projects, both here at NU and with colleagues across the country. Partnering with Dr. Sarah Drivdahl, NU’s Dean of the College of Arts and Sciences, Bourdeaux is conducting a study on couples, how they tell stories, and what the stories reveal about both personal and marriage identity. This summer, Bourdeaux and Drivdahl presented the preliminary results of their research at the International Association of Relationship Research.

In everything she does, Bourdeaux identifies her faith as the driving force. With a propensity toward relationship, she says she studies the world to understand diversity in communication, from personality to interaction and everything in between. But as a Christian, she says it hits deeper than just a surface curiosity.

“It’s messy, but the beautiful way we can create relationship in the midst of all the mess shows God’s goodness and glory, so I want to keep researching it,” Bourdeaux said. “I don’t think I will ever truly see all the amazing things that the Lord is capable of this side of the Kingdom, but I think that if we continue to seek out the ways He has helped us with our relationships, we’ll have a better idea of who He is.”

It was Bourdeaux’s faith that brought her to where she is today. Starting out in North Dakota on track to be a chemical engineer, she says she soon realized that God had an entirely different plan.

“I used to want to drive my own ship. But time and time again, I’ve realized that the Lord reveals more in me when I’m willing to follow Him,” Bourdeaux said.

While Bourdeaux acknowledged that it wasn’t always easy—she and her husband moved several times, and she almost gave up after a rocky first semester in her doctoral program—she said she found beauty in the struggle and in new beginnings.

“I came here not knowing anything about the Pacific Northwest, but I love it so much more than I ever knew I could. The mountains, the ocean, and this campus! It’s so small, but so rich in all the things it has to offer,” Bourdeaux said.

Bourdeaux said her advice to students navigating their way towards graduation and beyond is to let their passions fuel them.

“Find your passion. Find the thing that drives you, and never let it go,” Bourdeaux said. “Life will throw you curveballs, but a heart on fire will keep you going through whatever struggles come your way.”