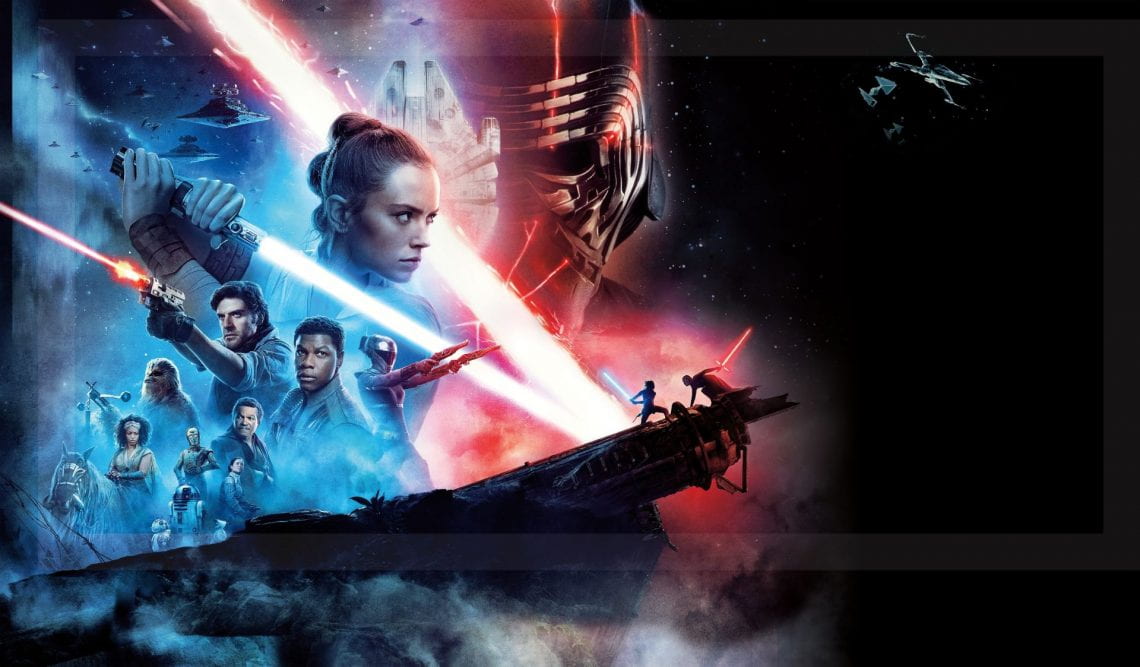 Film Review: The Rise of Skywalker

Editor’s Note: the following reflects the opinion of the writer, and not necessarily that of the Talon as a whole.

Star Wars: The Rise of Skywalker (2019) is directed by JJ Abrams and stars Daisy Ridley as Rey, Adam Driver as Kylo Ren/Ben Solo, John Boyega as Finn, Oscar Isaac as Po Dameron, and Ian McDiarmid as Palpatine. After three weekends, the film had garnered over $900 million globally, and soon after joined eight other films from 2019 to cross a total revenue exceeding $1 billion. Although critics give this film only a 54% rating, the audience score remains at a solid 86% and proves once again that the Star Wars fanbase will remain divided (at least until everyone sees the Mandalorian). While fans disliked the Last Jedi and enjoyed Rise of Skywalker, critics loved the former and disliked the latter. How did this trilogy turn into such a
polarizing mess?

Before we get into the movie review, most people would agree that a long-term vision for this trilogy was missing and that that vacancy severely hinders the trilogy from communicating a strong message and from telling a compelling story. As soon as JJ Abrams was hired to make the third movie in this trilogy, it seemed obvious that Disney did not have a plan and was doing
damage control for the insane fan backlash from Rian Johnson’s The Last Jedi. I would rather the entire trilogy be done by one director or by three directors than let one director do the first and the last films in a trilogy. If the director in the middle does his own thing, which Rian Johnson certainly did with episode 8, then bringing back JJ Abrams makes an attempt to find
cohesion in this trilogy much more awkward. The trilogy plays tug-of-war with itself because of this lack of vision. Hopefully Disney learns from people like Kevin Feige of Marvel to have a clear plan and vision for your story before planning out future projects.

In my opinion, Rise of Skywalker is disappointing and bland, but this is not uncommon for the third movie in a trilogy. Take almost any trilogy and look to the third to see how difficult it is to make a cohesive conclusion to a trilogy: Spider-Man 3, X-Men: The Last Stand, The Dark Knight Rises, Back to the Future 3, The Hobbit: Battle of the Five Armies, and even Star Wars
VI: Return of the Jedi. Of course, there are notable exceptions, such as the Lord of the Rings trilogy, the Indiana Jones trilogy, the Toy Story trilogy, or the How to Train Your Dragon trilogy. Despite these exceptions, the general trend in trilogies suggests that the finale lacks the same quality as its predecessors.

The Rise of Skywalker is no exception. Because of the reaction to the Last Jedi, much of the movie is devoted to damage control for elements that fans disliked from the previous movie. Unfortunately, I do not want to get into too many spoilers for this movie, so I cannot say much more, but if nothing else, this film ultimately fails because it is more concerned with appealing to
the audience than it is with telling a good or cohesive story.

Unfortunately, JJ Abrams already has shown us his fondness for nostalgia that has the potential to eclipse the story. Most people criticized him for the safe and familiar story of The Force Awakens that often borrows plot elements from A New Hope. I found his fondness for nostalgia more excusable in episode 7 than in episode 9 because he was doing a soft reboot to
excite the Star Wars fanbase again after 10 years of absence from the series. Not only that, Abrams also spends much of The Force Awakens introducing new characters into the Star Wars universe to be admired by younger generations. In other words, from a cultural, practical, and financial point of view, playing it safe with the plot makes sense, even if doing so means missing
an opportunity to do something new with the saga. However, the same cannot be said of the final film in a trilogy. As much as nostalgia made people excited about Star Wars again in 2015, the final film in a trilogy cannot rely on nostalgia alone in order to maintain cohesion in its conclusion.

The Rise of Skywalker is too obsessed with entertaining and appealing to its audience in order to tell a cohesive story. As much as I enjoyed the performances of most of the cast, especially of Adam Driver and Daisy Ridley, the film relies on predictable Star Wars plot points and entertaining action set pieces to distract from the ambiguous themes with minimal character growth for anyone. The film has nothing interesting to say about Rey and cuts directly against the “Rey is a nobody” theme from The Last Jedi; the film takes the safest possible character arc path for Kylo Ren but does not show that arc taking place; neither Finn nor Po Dameron have character growth moments at all; nobody else has enough screen time to sustain growth from one
perspective into another. Instead of developing its characters, the film relies on nostalgic plot points to make the story seem familiar but fails to have anything interesting to say of its own: Palpatine emerges from nowhere without a word of explanation in the film’s second scene; Rey and her friends spend most of the movie doing fetch quests that have no personal relevance;
Lando reappears but has little character growth or relevance to the plot outside of the end of the film, and only briefly.

The obsession with nostalgia overshadows the plot, muddying its message and robbing it of any moments of genuine character growth or memorable emotional experiences.

Overall, although concluding a trilogy in a satisfying way is no small task, this film fails to stick to any specific theme or message to tell its audiences and hopes that its entertainment value and branding will be enough to convince you to see it. That is not good enough.

For more Star Wars, check out The Mandalorian on Disney+ streaming now, and the final season of “Star Wars: The Clone Wars” will also be available on the streaming platform starting February 21.