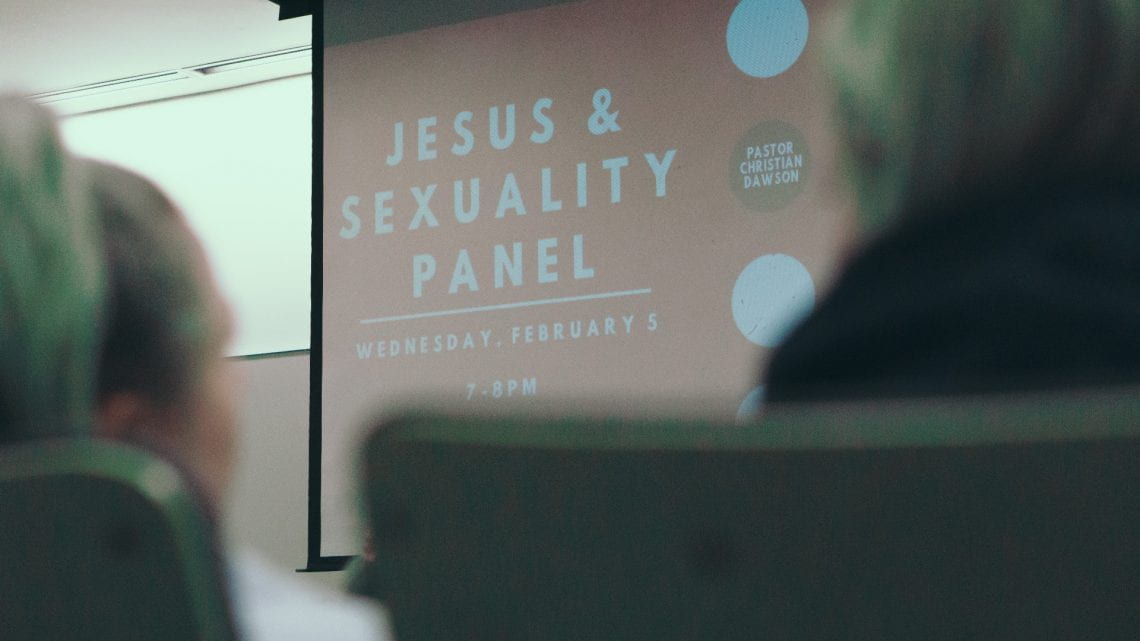 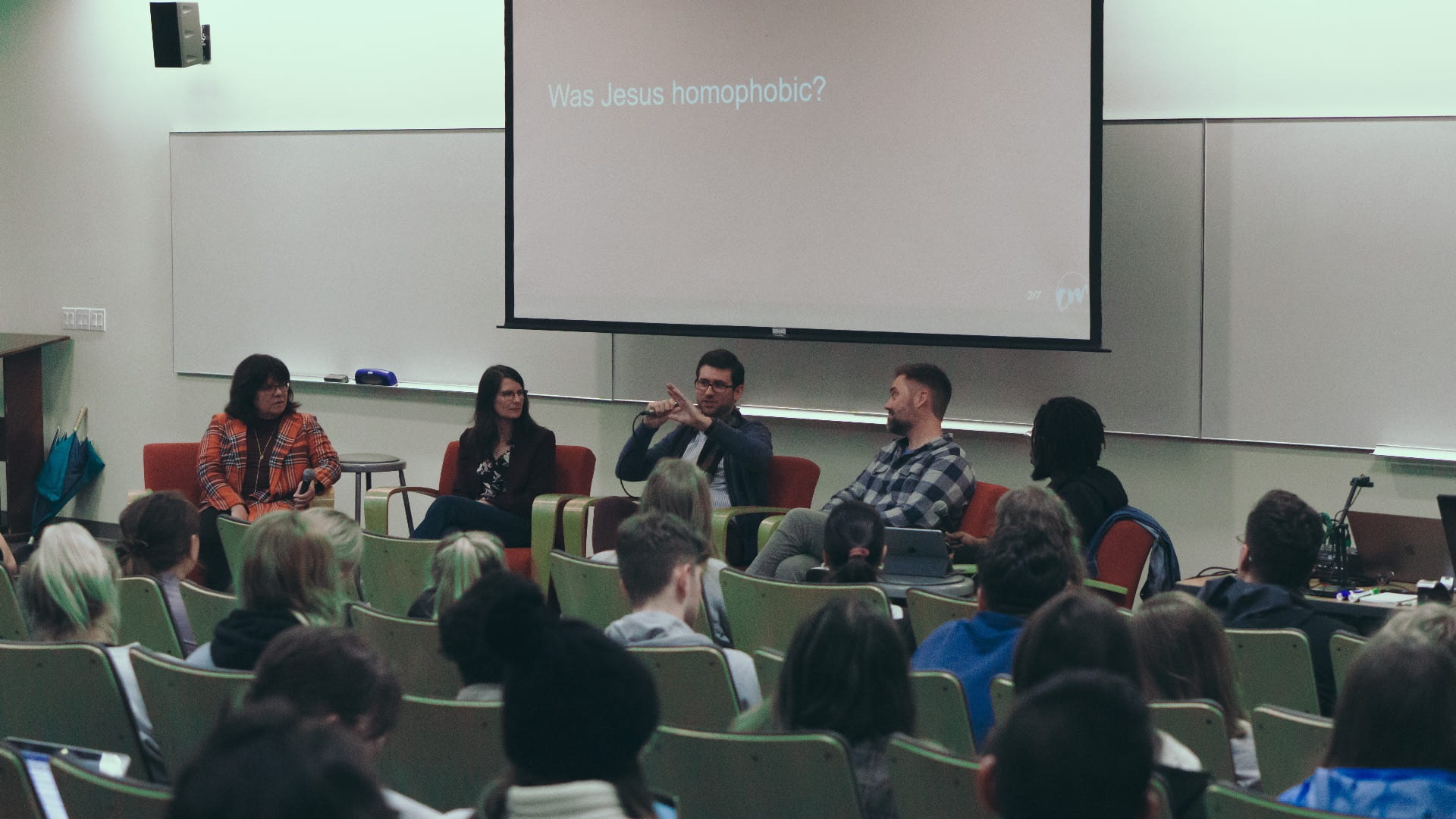 Campus Ministries’ current sermon series seeks to address hard questions and contemporary issues with the phrase “Jesus & _____.” Within this series was a mini-series titled “Jesus & Sexuality,” which consisted of a sermon by provost Jim Heugel on Jan. 24 and two panel events on Feb. 5.

The panel events included a morning panel during the regularly scheduled chapel times and an evening panel for continued discussion. Prior to the panel events, Campus Ministries provided a text-in line for students to send in questions anonymously, which was opened at the beginning of the semester, and then sorted the questions into groups for the panel to respond to.

The morning panelists included campus pastor Christian Dawson, dean of student development Rick Engstrom, Residence Life and housing director Sarah Jobson and Dr. Rowlanda Cawthon, an assistant professor in the College of Business. As covered below, these individuals discussed and shared some of their own opinions and thoughts regarding the previously submitted questions from students.

Jobson made an introductory statement before the panel discussion started, and said she wanted to combat the notion that they were speaking down to students in any way.

“We don’t have it all right and correct, we are in this with you,” she said.

Question: What are some failings of the contemporary church as it relates to sexuality?
The first panelist to answer was Cawthon, with her favorite quote: “Fear is the forerunner of calamity.” She went on to explain that there is a distinct absence of dialogue in the church about what the Bible says about sexuality.

Engstrom said that the church used to subscribe to the “scare tactic” when it came to sex, noting that this approach always leaves a lot of damage.

“[The church] has a rich theology of marriage, and a pathetic theology of singleness,” he said.

Dawson chimed in with his thoughts on singleness in the church, and how he wishes that society would use the term “unmarried” instead of “single.” He said that society idealizes sex so much that it seems to be the “highest good after meeting Jesus.”

The panelists finalized their response with the general consensus that marriage is so much more than sex, but it is the thing society talks about the most.

Question: Are all sins equal?
Cawthon jumped right into the question with a cautionary statement.

“We don’t know their story, so who are we to say they are a sinner?” she said.

She said that the church needs to be less eager to point a finger at others, and more eager to look at their own hearts, because that is when change actually happens. As the church, she said, we have the power to guide people back to Jesus, but just because we have any religious obligations does not mean that we get to be free from ever sinning.

Engstrom addressed the “Jesus and Sexuality” side of this question. He told about his own experiences in youth group, with the analogy of virginity being a flower, and once the petals come off, they can’t go back on again.

“Those messages, yes there is truth: you either are a virgin or you’re not, but having sex before marriage is not an unforgiveable sin,” he said. “We have grace, we have forgiveness.”

Dawson brought up the story in John 8, where the Pharisees find a women caught in adultery, and they bring her to Jesus to expose her wrong doing. Jesus replies, “Let him who is without sin among you be the first to cast a stone at her.” Dawson noted that Jesus is the only one of those men who could have cast a stone, but He didn’t. Instead, he told the woman to go and sin no more. Dawson emphasized that wholeness is not about your virginity, it is about Jesus stepping into a life that is not whole, and making it whole.

Question: Is sex before marriage a sin?
Engstrom was the first to answer, noting that while the Bible doesn’t say explicitly don’t have sex before you get married, in every narrative about sexual acts outside of marriage, something goes wrong. This tells the church that sex before marriage is not good. The Bible is not a law book, but a narrative, Engstrom said; it tells us the stories of how we should live our lives.

Cawthorn cemented Enstrom’s point by talking about the story of King David and Bathsheba.

“David failed in the way of sexuality, he had sex with someone who wasn’t his wife. In fact, she belonged to someone else. But the consequences followed…. When you wait to have sex before marriage you are waiting on God to bring you the person you need,” she said.

That is what we are supposed to do too, she added; being sexually attracted to someone is not a sin, it is what you do with it that matters. She also pointed out that David repented of his sins and asked God for a new, clean heart.

The speakers at this event emphasized that the views they hold are not being spoken for by the whole university, just Jesus. Dawson and Engstrom returned for this panel, joined by Dr. Sarah Drivdahl, dean of the College of Arts & Sciences, Dr. Cherri Seese, assistant professor of psychology, and Dr. Joshua Ziefle, dean of the College of Ministry.

Dawson started the panel by recommending the book “Confronting Christianity” by Rebecca McLaughlin. The current Campus Ministries sermon series is derived from this book.

Question: When will it be normal for Christian leaders to talk openly about all things sexuality?

Ziefle started by calling back to ancient Greek philosophy. He talked about the notion that the Greeks saw the body as bad and the spirit as good. Saint Augustine stated that original sin translated into sexual acts, he said, and the early church perpetuated that idea, but this is no longer a common modern belief. He told about his youth group days, referring to Engstrom’s comments about youth group sex talks.

“There has been a gradual process,” Ziefle said.

“Our whole culture does not talk about sex in a healthy way,” Drivdahl added. She noted the statistic that only about half of Americans have had an educational sexual conversation (“The Talk”) with their parents.

Dr. Seese encouraged students to keep asking about it, saying that “that is how change is made.”

Ziefle answered this question simply, “Jesus wasn’t hateful or prejudice toward anyone.”

Drivdahl added that “Jesus’ posture towards all humans is positive! He loves us and wants us.” She talked about how there is a tendency for different cultures to emphasize certain sins as worse than others, and how that shifts over time.

Engstrom noted that Jesus chose to associate with all of those who the religious elites of his day would not associate with: prostitutes, tax collectors, all those who were marginalized. Jesus did not endorse their sin, but he loved them.

“His whole message was about radical grace. It upset people. I don’t see where homosexuals are exempt from Jesus’ grace,” Dr. Seese said.

Question: What do Christians think about the LGBTQ+ community. Do they affirm or not?

“Show them love and peace of Christ,” she said. “Then let the Holy Spirit do the revelation and repentance work.”

After a long pause of silence, Dr. Zeifle added “Most of us are afraid to say the wrong thing.” He also stated that he has no problem affirming every person as being made in the image of God.

Engstrom followed this statement by sharing that he has family members that are part of the LGBTQ+ community, and so for him, it is deeply personal stuff.

“Everyone’s dignity deserves to be affirmed,” he said. “But for some reason the church has chosen to brand some sins as unforgivable.”

The next question was for those who have been oppressed and raised in fear of Christian reactions to their sexuality.

Dawson started with a blanket apology for any of those who feel like they have not been loved well. He also stated that intimate relationships don’t have to be sexual. They can just be between two people that love each other. He encouraged those who are struggling to find a place in the church or a group of fellow Christians to love them though this hard time.

Drivdahl, who is a psychology professor in addition to her role as dean, stated that there is plenty of evidence that people can be attracted to those of their same sex; however, the cause of those attractions is unclear.

“Just because it is part of us, doesn’t mean that it is the best for us,” she said.

People all need deep intimate relationships to live, it’s essential. So, she said, if the church asks those who are homosexual to be celibate, they better be ready to love that person. She also pointed out that the LGBTQ+ community loves really well.

“If we don’t offer that [love] in the church, then there is no pull into the church.” she said.

Question: How do we love others without compromising our beliefs? What is my role in the life of a LGBTQ friend?

Dr. Seese pointed out that Christians can still welcome those who are gay into the church without affirming their lifestyle.

“We are not their Holy Spirit,” she said, noting that Christians can walk along side them and affirm them as human beings.

Engstrom spoke to the division of the church over this issue, noting that many denominations are torn up about this topic. Just because the state says that same sex marriage is legal, he said, doesn’t mean the church has to believe that too. He said that believers should refuse to disown those who struggle with homosexuality; Christians should be anti-cancel culture.

“This issue creates tough conversations, but as family we should commit to love one another,” he said.

Drivdahl reminded the audience that people don’t grow by being judged, they grow because they are being loved, and so Jesus-followers should pray for and love them.

“The role of any friend is to be a friend.” Ziefle said. “This means we laugh with them and care for them.” It is Christ’s job to welcome them into the body of Christ, he said, we just welcome them into our community.

The final question of the evening was not one that had been submitted, but it was one that Pastor Dawson wanted to address.

Question: What if I am gay?

“You are a beloved child of God. Period. That never changes,” Engstrom said.  He added that he is happy to talk with anyone who needs it.

Drivdahl said that college-age adults often struggle with same sex attraction, that is normal; but this doesn’t mean that they are gay, she said.

“Don’t feel the need to label yourself,” she said, adding that identity is more than just sexuality; it is who we are in Christ.

Dawson left the audience with the encouragement to “be a follower of Christ,” and added that we are not our desires.

Each panelist stated that they are happy to talk with and guide anyone struggling with same sex attraction.

Dawson acknowledged that this panel probably probed more questions than it answered.

“We can agree or disagree,” He said. “But we need to hold everything to Jesus’ lordship.”

Book recommendations on the topics of Jesus & Sexuality are on the Campus Ministries devo app.

“Let’s go and be a community of civility and love,” Dawson said.