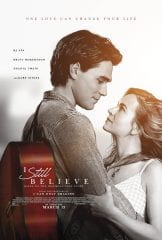 The 2020 Lionsgate film “I Still Believe” — starring KJ Apa (Riverdale, The Hate U Give), Britt Robertson (“Tomorrowland,” “The Space Between Us”), Gary Sinise (“Forest Gump”) and Nathan Parsons (“General Hospital”), and directed by Andrew and Jon Erwin — dramatizes the story of Jeremy and Melissa Camp. The events of their journey would lead Camp to write his song “I Still Believe,” and later a memoir by the same name, both of which provide the basis for the film.

The movie opens with Camp (played by Apa) leaving his family home in Indiana to attend Calvary Chapel Bible College in California. At CCBC, his near-meteoric rise to stardom as a singer and songwriter begins under the tutelage of Jean-Luc Lajoie (Parsons), frontman of the band The Kry. He also meets a girl named Melissa (Robertson), who he is almost instantly smitten for. The rest of the film shows Camp’s budding music career, and the humor and struggles as he and Melissa try to navigate a dating relationship which eventually leads to their marriage. Health complications for one of them, however, presents the couple with several difficult challenges right around the time of their wedding. Their faith and courage in the midst of struggle form the focal point of the story, and Camp’s music is often born out of those moments.

I was pleasantly surprised by this film, as it flipped my expectations on their head. It’s an unfortunate cliche that Christian flicks are often heavy on message but light on actual film-making craft, but this was not the case for “I Still Believe.” Apa and Robertson shine as the lead characters, bringing life to an emotional story in a convincing fashion that seems almost effortless. There are certainly awkward moments, but this is more due to the realities of dating relationships and the environment being portrayed than any fault of the actors. To that note, CCBC as the movie presents it feels very much like NU transplanted to California, with all the good and bad that would entail: a strong faith community on the one hand, and an extremely awkward dating culture on the other.

Sinise and Parsons shine in their supporting roles, both playing a mentor role for Camp and bringing a steady wisdom to several emotional moments in the film. Parsons’ character is actually a collapsing of two people into one; he really did guide Camp’s music career, but another individual’s role (*cough* love triangle) from the real story was written into his character by the filmmakers so as to avoid over-complicating the storyline. While I neither enjoyed nor agreed with that choice, I can understand why it was done, as there are only so many scenes, characters and plot points directors can realistically work with.

I was impressed by what the Erwin brothers did with the film overall, however. Some of the camera angles are different from what one is used to seeing from a film — they make frequent use of an over-the-shoulder kind of shot, which almost makes it feel like you’re experiencing the story as a character in it — but those choices seem to have been well-informed decisions which serve to bring an intimacy and emotional vividness to the film. There are heartwarming moments and heartbreaking ones alike, and both are presented very well. The warmth of young love and the tear-jerking nature of the difficult moments the Camp’s battle through are both captured in such a way as to move your heart and bring you along for the emotional roller-coaster the characters go through.

The message of the film is one of hope amid struggle, and faith in the midst of life’s most difficult challenges. This is best articulated by one of the characters saying that if even a single person’s life is made better by hearing their story, if it leads to even one person putting their faith in Jesus, then everything the character is going through will be worth it.

“I Still Believe” is now available for rent and digital download (Amazon Prime Video, Apple TV, and Google Play, to name a few), and I can’t recommend the movie enough. The film is enjoyable as a love story, inspiring as a story of strength and courage, and humbling-yet-empowering as a story of faith. Grab a tissue box along with the popcorn, as there probably won’t be a dry eye in the room by the end of the movie, but in terms of both message, storytelling and cinematic craft, this is the best faith-centered film I’ve seen in years.

A Dream is a Wish Your Art Makes