Accents, Chaos and Cows: A Preview of NU’s Production of “Under Milk Wood”

Chrystal Helmcke, NU’s theatre director for the past 13 years, oversees this semester’s production of “Under Milk Wood,” a radio drama that has given her team and cast the freedom to act within coronavirus guidelines. After seeing a performance of “Under Milk Wood” at the University of Washington’s theatre, the play had been stuck in the back of Helmcke’s mind waiting for an opportunity to be performed at NU.

“Under Milk Wood,” by Dylan Thomas, cannot be summarized in few words, but you better believe the cast tried to:

“Did I pronounce that right?” – Emma Tompkins 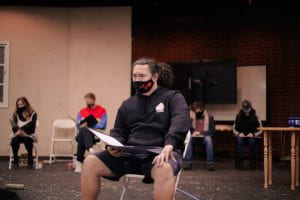 It has also been described as an old, Welsh version of an episode of “The Office.” There’s quite a lot of “naughty humor,” as Helmcke explained, but it also has a lot of heartwarming and symbolic themes throughout.

The play is staged in a fictional Welsh village, Llaregyb, and features a wide assortment of flawed characters whom you’ll grow to love almost as much as the actors have. While this semester’s production isn’t a musical, there are multiple original songs in the play that senior Fiona Cochran has worked with the cast to write melodies for. 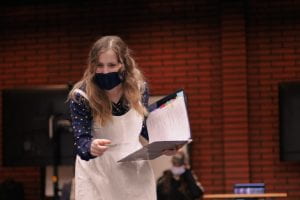 As a radio drama, the audio and vocals are the center focus and will allow the team to broadcast it live on YouTube as well as to attend the showings in-person. The performances will take place March 25, 26 and 27. Helmcke’s hope is for this performance to be a community event, whether you’re listening to the live audio or sitting in the Millard theater.

Figuring out how to actually produce this has been the most prominent challenge, but the biggest overall struggle has been “moving the HyFlex equipment out of the way and back” Helmcke said. The morning classes on Tuesdays and Thursdays can probably agree with that statement, as sometimes the HyFlex equipment has had issues from the shuffling that happened at night rehearsals. 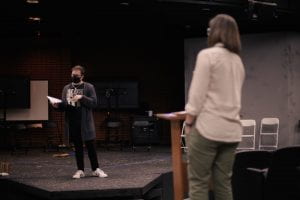 Another challenge the group experiences is keeping the energy levels up while performing. It’s a lot harder to bounce energy back and forth between actors with masks and distance, but there has certainly been a lot of magic at the rehearsals and quite a lot of laughter.

Come listen to the hard work of the NU theatre cast for their production of “Under Milk Wood” on March 25, 26 and 27. If you want to be one of the people watching it live in the theater, you can buy tickets here.