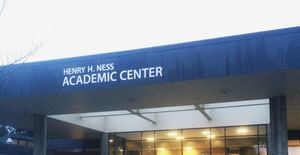 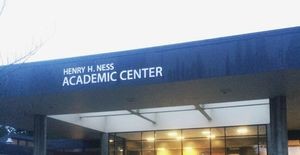 The Ness Academic Center has been a fixture to our campus since 1960.  Named after Northwest University’s first president Henry H. Ness, the building is made up of Bronson, Rice, Williams, and Fee halls—originally all separate buildings.

Over the years, thousands of students have stepped over the Ness threshold to engage in the unique learning opportunities NU has to offer. However, while our academic standards and offerings have increased, this facility has taken a beating.

Earlier this week a student’s chair broke from under her in Fee-004 causing her to fall. The fall resulted in the student receiving a concussion that kept her from coming to class the rest of the week. This situation was embarrassing for the student, but even more so for the university.

According to Registrar, Sandy Hendrickson, “the administration was notified by the professor” on the same day it happened and “helped [the student] complete the student incident report,” which was submitted to the Student Development office.

Hendrickson spoke favorably about the forthcoming classroom updates that will be coming over the next few years. She said that a sample group of students and faculty have tested a selection of potential new desks and she is very excited about the model they have chosen. The order was placed last week and it is expected that there will be new furniture in two classrooms by the start of spring term.

Another area of concern is the Ness Academic Center’s bathrooms. The sinks only produce a slow trickle of water and getting in and out of the stalls is difficult due to how poorly they were designed. This is an issue of high importance because it limits accessibility for those with disabilities.

The Americans with Disabilities Act of 1990 “requires that all washrooms, whether they’re newly constructed or renovated, must be usable by people with disabilities.” The current bathrooms in the Ness Academic Center do not meet this standard and any student or faculty member with disabilities might have to go to a different building in order to use the bathroom.

President Joseph Castleberry said, “We work really hard to keep the Ness [building] in working shape.” Castleberry also said he “[does not] expect that [Northwest] will be able to replace [the Ness Academic Center] for another ten to fifteen years.” The school is currently in the process of seeking permission from the City of Kirkland to do so through the master planning process.

The University of Salford’s School of the Built Environment conducted a survey in February 2015 that demonstrates how powerful school building design can be in promoting student success. The study revealed a “25-percent impact of school design on over seven-hundred [student’s] learning rates.”

The relatively new Argue Health and Sciences Center shows that NU is on the right track with campus facilities. However, the extremely outdated classroom materials and bathroom facilities in the Ness Academic Center must be addressed.

NU professor Clint Bryan said he is “accustomed to the classroom spaces dedicated to the humanities tending to be less updated than those for other majors.” Coming from Middle Tennessee State University, Bryan has already experienced inequality in classroom facilities amongst majors. He said that at his previous school, they “spent $147 million on a new STEM building, while English met in an older building with many issues.”

Many students want NU to become a place they are proud to show off to their friends and family. Like Professor Bryan, we “anticipate the day that all of our buildings represent our best efforts—aesthetically, pedagogically, and professionally.”