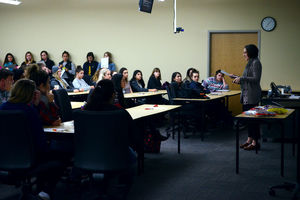 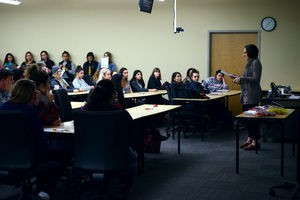 Over a hundred students attended the Housing Info Meeting hosted by Sarah Jobson, Director of Residential Life and Student Housing, on March 14th. Jobson described the steps for applying for fall and summer residence hall housing, but the main focus of the night was the new student apartment application process, which has been redesigned since last spring. Well aware of the notorious difficulty of procuring an apartment at NU, the strong turnout of students listened to Jobson intently.

The new application process for apartments is a simplified point system: each applicant will be ranked based on their age (only students ages 20-25 are eligible) and academic standing, as determined by current earned credit hours. The total points for each applying 4-person or 6-person group will be tallied, and the top 28 ranking groups will receive the available apartments. Returning apartment residents are guaranteed an apartment unit only if they apply in a group that consists entirely of other returners.

A total of 124 students can be placed in student apartments, divided among the available 22 four-person and 6 six-person units. In recent years, between 160 and 180 students have applied for these slots.

Applying to the apartments was formerly an elaborate point system that not only considered age and academic standing, but looked at factors such as student leadership, athletic involvement, parking tickets, chapel attendance, and more. In an attempt both to simplify and equalize chances for applicants, there was a reformat last spring to a “first-come, first-serve” distribution, which brought about the unforeseen result of students lining up outside the office the day before applications began.

Over the last year, the Residence Life & Housing staff have focused on developing an updated design with extensive input from students and NU’s head administrators. “We’ve worked really hard – a lot of research, a lot of phone calls, and a lot of late nights,” Jobson said. Although aware they cannot satisfy everyone, they feel this new model appropriately balances recognizing upperclassmen, older students, and returning apartment residents, while giving other students a reasonable chance at an apartment spot. Jobson said she does not foresee returning to a more complicated point system.

The restructure of student housing includes designating Guy, Perks, and Crowder residence halls for the incoming freshmen students, while returning and transfer students will occupy Gray and Beatty. This design is intended to allow NU to better serve the demographics of both student groups.

Ultimately, Jobson hopes that students will know that the Student Development staff recognizes housing as an important part of each student’s holistic development. Jobson said, “We do things with purpose and intention, for the good of students and for the good of NU… where and how [students] live on campus is important to us.”

Apartment applications can be obtained in the Student Development Center and are due April 14th by 5pm. The application for summer housing opened March 14th and will be open only to students registered for fall classes. Students can direct any inquiries to housing@northwestu.edu.