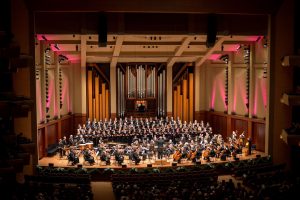 In celebrating the true meaning of Christmas, the concert program included new carol arrangements as well as traditional pieces and several sing-alongs for the audience to join in their Christmas favorites.

The concert completed its ninth season, conducted by Professor William Owen and accompanied by pianist and NU professor Mizue Yamada-Fells.

Owen, who has been a professor at NU for 19 years, said that the concert allows students a once-in-a-lifetime opportunity to sing in a world-class hall.

Student Kelsie Jelsema has attended the concert for years, and said she was excited to be able to finally be a part of Concert Choir.

“I think the coolest thing was to be in Benaroya. I’ve been going there for years but getting to actually be up on the stage performing, it was such an amazing experience. Looking out and seeing everyone and just hearing the music, the orchestra was amazing and the choir sounded amazing,” Jelsema said.

Student Tiffanie Lin, one of three NU students who performed in the orchestra, has played cello since fourth grade. Lin said she was amazed at the opportunity to play at such an incredible concert hall. It was the biggest stage she has ever performed on.

“My favorite moment was getting ready to play and the first sight [of the stage at Benaroya Hall], you see how big it is, I wasn’t expecting the hall to be that big,” Lin said.

To Owen, however, the concert has been much more than a performance on a grand stage.

“I try to put the concerts together in such a way that it’s really about the story of Christmas. If you get right down to it, my deepest prayer and desire is that we glorify Jesus by helping to create transcendent experiences,” Owen said.

Along with the demanding collegiate pieces the choirs perform, Owen decided to included sing-alongs in each year’s program to engage the audience.

“People at Christmas time want to sing Christmas carols. They want to hear something that familiar. I want [the audience] to participate in it and feel like they’re a part of it, and having three or four sing-alongs really facilitates that,” he said.

NU Professor Dr. Jamie Froebe, who has come to the Christmas Traditions concert for three years, said the fact that the choirs are comprised of Christians who deeply believe in the lyrics they are singing makes this concert special.

“It is a combination of quality – it is impressively well done – and it’s also about heart,” Froebe said.

Froebe also credits Owen’s selection of pieces that make for a stirring and emotional experience.

“His selection of music is incredible. Every year at least two pieces bring me to tears,” she said.

Owen believes that deep purpose behind the performance sets the concert apart from similar events because of its deep roots in faith, and the true meaning of this season, of Jesus’ birth.

“You could go online right now and find 20 concerts in Seattle you could go to. What makes ours unique? The power of the Holy Spirit,” he said.

Owen noted the deep feeling and power that comes from a choir who is not simply performing pieces of music, but are focused on glorifying the Lord.